Social Artist Erik Vink together with the ‘Sociaal Theater’ from ’s-Hertogenbosch created the ‘Burning Demons’ project for Bosch Parade 2022. It’s a spectacular project for which the Sociaal Theater participants’ demons form the foundation. As a prelude to this, Erik will create a project in which three Burning Demon singers will be sent as advance announcers into the Bossche Zomer 2021. They will sing a selection of the texts created for the main project, each of them standing on a triangular raft.

The singers will move through the town in a choreography on water, standing on triangular rafts depicting a massive and demonic angry eye.

This eye is the three demons´point of departure within the Burning Demons concept, and it was created during brainstorms with the Sociaal Theater participants. These eyes will return in a broader and more elaborate fashion within the 2022 Bosch Parade project.

The art work will expectedly AND unexpectedly pop up on the streams of´s-Hertogenbosch on July 3 and 4, as well as during the July 1 opening of the ‘Bossche Zomer’ 2021.

The work has a clear long term perspective. It is a standalone prelude to the ‘Burning demons’ and can therefore be viewed as an in-depth exercise. The costumes, Aart Strootman’s music, Joachim Robbrecht’s texts and the Sociaal Theater’s demonic eye will be adding extra charge to the 2022 Bosch Parde.

Erik Vink’s Klein Triptiek will unexpectedly pop up in ’s-Hertogenbosch from July 1 through 4, 2021. 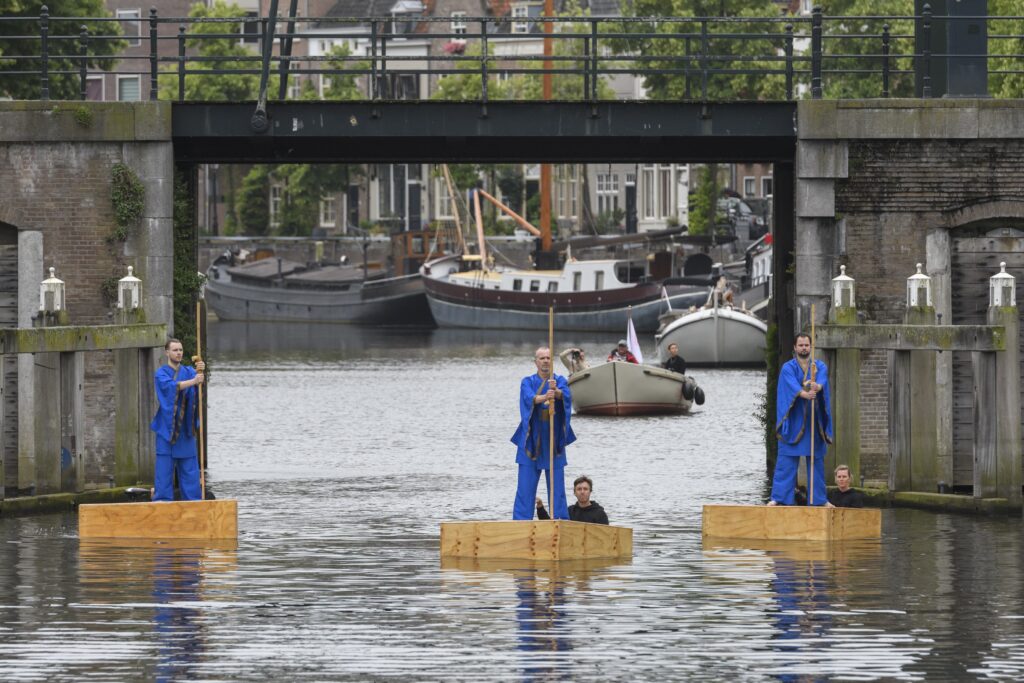